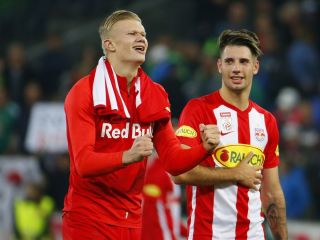 Man Utd have been linked with Red Bull Salzburg striker Erling Braut Haaland over the past few months.

A lot of the reported interest is built around the fact Ole Gunnar Solskjaer coached the 19-year-old when the pair were at Molde.

They’ve since moved on to pastures new with Solskjaer managing Manchester United and Haaland making a name for himself in the Champions League.

Sky Sports claim United head scout Marcel Bout was in attendance last night when the Austrian side were beaten 2-0 by Liverpool, which meant they will drop to the Europa League for the knockout phase.

That could put them in contention to face United in the next round — but not if United avoid defeat tomorrow night against AZ Alkmaar and top their group.

We’d all like to see how Phil Jones would cope against Haaland, right?

It is unclear if the Norway international will play in Europa with his current side or make a move elsewhere in January.

An article in Norwegian newspaper Dagbladet (via Sport Witness) suggests the doors are open for the young goalscorer.

Journalist Morten Pedersen states ‘something is going on and it should be Ole Gunnar Solskjaer who stands first in line’ for Haaland.

Pedersen doesn’t disregard a January transfer for Haaland, provided the player is open to a move in the winter and if the offer is right.

The report also claims that if the United manager were to call the teenager’s father, Alf-Inge Haaland, to check whether his son is willing to make a switch to Old Trafford in January, Solskjaer would receive ‘yes’ as an answer.