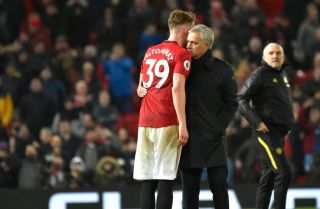 The Tottenham manager dismissed criticism of his record with youth players, citing the Scottish midfielder as an example.

José Mourinho has used Scott McTominay’s rise at Man Utd, as well as Raphael Varane being one of the best defenders in world football as he defended his record of brining through young players.

McTominay has not only become a regular at Old Trafford under Ole Gunnar Solskjaer this season, but United fans are delighted to see a new leader emerge from midfield. A department that has been lacking in quality and leadership for years.

The Scotland international recently returned from injury and earned rave reviews after his performances in last week’s wins over Spurs and Man City.

After making his MUFC debut in 2017 under Mourinho, the 23-year-old received the Manager’s Player of the Season award from the Portuguese tactician at the end of the 2017/18 campaign.

Speaking ahead of Spurs’ Champions League fixture against Bayern Munich on Wednesday, Mourinho took offence when his record on bringing through youth players was questioned by a journalist.

The journalist in question asked: “There has been some criticism of your handling of young players and academies in the past, maybe at Chelsea and United. Do you think that’s been fair criticism? And are you determined to prove at Tottenham that it was unfair?”

“Raphael Varane is one of the best players in the world, yes, it’s fair criticism.”

McTominay has certainly been one of United’s best performers this season and Mourinho obviously had a great influence on him, but we think Solskjaer deserves credit for further developing the midfielder.

Mourinho doesn’t want to hear that part though, it’s always about him… Just him.