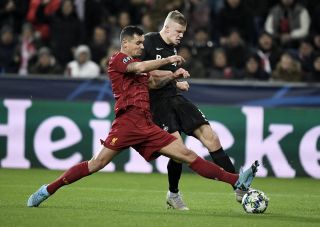 According to Sky Sports, there were scouts from 40 different European teams at the Red Bull Arena last night and there’s plenty of reason to believe a large number of those scouts were there to watch 19-year-old Erling Haaland.

Liverpool won the game 2-0 to qualify for the knockout phase of the Champions League, while Salzburg join Manchester United in the Europa League after finishing third in Group E.

Haaland has been linked to a number of top European clubs after scoring 28 goals in 22 games for the Austrian outfit this season.

With United in need of a goalscorer, it comes as no surprise that Ole Gunnar Solskjaer would want to link up with the young striker he had during his time at Molde.

Now the youngster is earning the spotlight on Europe’s biggest stage and warrants links to the biggest clubs football has to offer.

However, Haaland’s agent Mino Raiola is reportedly proposing that the striker joins another European team first before joining United further down the line in his career, as per The Athletic.

When asked about his future before Salzburg’s Champions League clash with Liverpool, Haaland said (via the Metro): ‘I just focus on my job — playing football — to enjoy what I do every day and to go in with a clear mindset to be in the present and enjoy the moment right now.

‘My focus is Salzburg and me as a player. So it’s not hard at all. I’m enjoying playing football.’

Haaland would walk into the current United team and offers something Solskjaer doesn’t currently have at his disposal, so it makes sense for the club to keep a close eye on his progress.

Football clubs need to be wary of so-called ‘super agents’ like Raiola — and United executive vice-chairman Ed Woodward and done plenty of business with the Italian in recent years on deals involving Paul Pogba, Zlatan Ibrahimovic and Henrikh Mkhitaryan.

The Sun has linked Haaland with moves to not just United but Real Madrid and Liverpool.