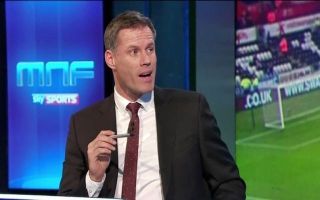 The ex-England international compared Anthony Martial, Marcus Rashford and Daniel James to City and Liverpool’s front-threes, which are both up there with the best in Europe.

Carragher adds that United’s star attackers aren’t consistent enough yet and his assessment seems bang on.

Martial has spent a chunk of this season on the sidelines with injuries whilst Rashford is showing his best form yet after going through a difficult patch at the beginning of the season.

Daniel James has settled in quicker than anyone could have imagined. His aim for next season will be to add more goals to his game and his crossing is crying out for a proper centre-forward inside the box.

Here’s what Carragher had to say about the United trio (via Sky Sports):

“Anthony Martial, Marcus Rashford and Daniel James — when these three are running forward, they are as good as the City three or Liverpool three, they’re just not consistent enough, that’s their problem.

“But at the weekend they were out of this word, and City couldn’t cope with them.

“Pace and movement, with players moving all over the place, and with it happening that quickly, City could never get back and organised.

“I thought Manchester United were absolutely outstanding and thoroughly deserved the win.”

No-one is saying United aren’t a good side when they find their groove — on the counter-attack — but it’s against the lesser teams that we seem to struggle.

The Red Devils need to be beating the likes of Bournemouth if Ole Gunnar Solskjaer is to deliver Champions League football this season. Especially now that we are gaining ground on the top four with Chelsea dropping points over the past month.