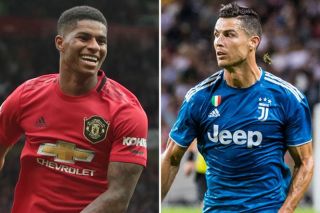 Rashford is enjoying his best season yet for Man Utd with 13 goals in 21 appearances.

To put some context to his form of late, the 22-year-old has scored 13 goals in his last 14 matches for club and country, with his latest strike coming against Man City in Saturday’s derby as United won 2-1.

Rashford is without question one of the most exciting attacking players in English football and credit must be given to manager Ole Gunnar Solskjaer considering his previous boss, José Mourinho, appeared to be losing patience with the youth team graduate.

Now Rashford’s name is being mentioned in the same breath as United legend Ronaldo, who netted an impressive 118 goals in 292 appearances for the club between 2003 and 2009 — during a spell which saw him blossom into one of the greatest footballers of all-time.

Solskjaer has welcomed the comparisons between the two men when asked if Rashford’s performances reminded him of the Portugal superstar, currently playing for Juventus, insisting they both have the same attributes.

“It’s very easy to compare the two of them, yes,” Solskjaer is quoted by The Guardian. “Both with skills, body shape, attitude, attributes – everything. The boy has every chance in the world to become a top, top player. Let’s hope he continues like this.”

United are back in action on Thursday night for their final group game in the Europa League. While our place in the knockout phase is secured, Solskjaer will be aiming to beat AZ Alkmaar in order to top the group to avoid playing one of the Champions League casualties in the next round.

Rashford may be granted a rest for the game after his derby day heroics, though Solskjaer will probably select him as a substitute to tackle any potential nervy moments if the game isn’t going United’s way.

Then it’s the Carabao Cup as United face Colchester in the quarter-final.