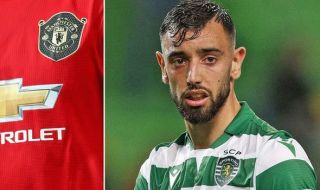 Man Utd have again been linked with Sporting Lisbon star Bruno Fernandes ahead of the January transfer window.

The Red Devils were strongly linked with a move for the Portugal international in the summer, but a report from the Daily Mail then suggested the club were quickly dissuaded from pursuing a deal after it emerged Fernandes gave the ball away too often.

Now United have what the Daily Express describes as a “strong interest” in Fernandes and a January bid is in the pipeline.

While it is noted that United must fight off interest from Atletico Madrid to seal a deal for the Sporting playmaker, it doesn’t really add up that they’d go for Fernandes after refusing to buy him in the summer due to concerns about his nature of play.

However, Portuguese newspaper O Jogo say that United are “pushing hard to sign the midfielder”, as cited by the Express.

Fernandes has scored 12 goals and registered ten assists already this season — and if you can get your mind around the fact he’s playing in a weaker division than the Premier League, you probably think we missed a trick leaving it this late to snap him up.

These reports just don’t add up and it looks like Fernandes will be linked with United in every transfer window until he gets his big move.