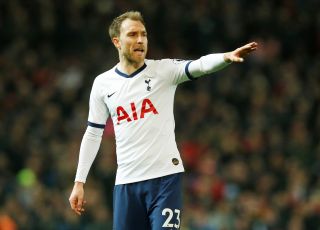 Eriksen’s contract at Spurs expires at the end of the season and he is set to leave the club — either in the summer on a Bosman, or next month if a transfer fee is agreed with the London club.

The Denmark international has been one of the best players in the Premier League for years.

However, this season we haven’t seen the best of Eriksen. His relationship with ex-manager Mauricio Pochettino became frosty and it sounds like he still wants to leave his current club, despite José Mourinho’s appointment last month.

Jamie Spencer of 90min claims to have spoken to a United source, who said, “Of course, the club would be interested,” when asked about the Red Devils potentially targeting Eriksen.

“The club have a longstanding interest in Eriksen, but the player would need to make it known he is keen on the move — something he hasn’t been in preview windows.”

If he wasn’t interested in joining United before, why would he change his mind now?

Eriksen could be available for as little as £40m in January due to his contract situation, as per the Daily Mail, with Spurs reportedly willing to listen to offers for the playmaker rather than lose him on a free transfer.

That’s a relatively small price to play for a player of Eriksen’s standard and at 27 he should be reaching his prime.

His contract should allow him to formally speak to foreign clubs as soon as he enters the final six months of the deal on New Year’s Dad, so that might put United in gear to strike a deal early on.