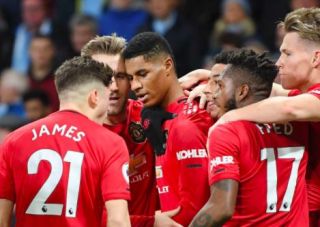 Ole Gunnar Solskjaer’s side secured impressive victories over Tottenham and Manchester City this week, lifting them to fifth in the league table. Triumphs over Jose Mourinho and Pep Guardiola in the space of three days mean United have now closed the gap on fourth placed Chelsea to just five points.

READ MORE:  Opinion: Why biggest test is yet to come for Solskjaer after Manchester derby victory

“There’s a long way to go. Chelsea are a young side and are going to have their ups and downs. Spurs aren’t going to be far away either now Jose Mourinho has been appointed. You’ve got Chelsea, Arsenal, Tottenham, Manchester United, four big football clubs, vying for what looks to be one spot in the top four.”

Liverpool are running away with the league title and Leicester have already built a nine point gap on fourth placed Chelsea, so it looks like there will only be one remaining Champions League spot to fight for.

Many United fans would have believed that winning the Europa League would be the most realistic opportunity for the Reds to qualify for the Champions League, but the victories last week have provided a new sense of optimism.

However, Solskjaer’s squad is still far too weak and injuries to the likes of Marcus Rashford and Anthony Martial could prove fatal. United have to back the Norwegian in January and invest in a midfielder and a forward if the Reds are to have any chance of finishing in fourth position.

United have a run of favourable fixtures coming up against Everton, Newcastle and Watford, but as we have seen so often this season, it is the ‘winnable games’ that the Reds struggle with.

If Solskjaer can find a way of getting results against the teams lower down in the league as well as top, there may just be a chance of a top four finish.