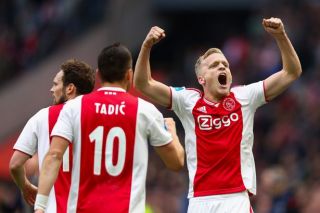 It looks like Ajax midfielder Donny van de Beek will be involved in a transfer tussle this summer with reports that Man Utd are set for a battle with Real Madrid for the player’s signature.

The Daily Express claims Manchester United are “keen” on landing the midfielder as Ole Gunnar Solskjaer looks to rebuild his side after a difficult start to the 2019/20 campaign.

However, after two 2-1 wins over Tottenham and Man City last week, it looks like the Norwegian’s job is safe again and there will be plans to sign new players in the coming months — maybe even as early as January.

The report suggests Solskjaer is in the hunt for midfielders having failed to bring in replacements for Marouane Fellaini and Ander Herrera.

Van de Beek has an impressive record this season too, racking up five goals and providing four assists for Ajax, so it comes with no surprise that United are said to be interested I signing the 22-year-old.

But the Express says Real Madrid are determined to beat United in the race for Dutch midfielder. Perhaps they’re out for revenge after failing to prise Paul Pogba away from Old Trafford in the summer?