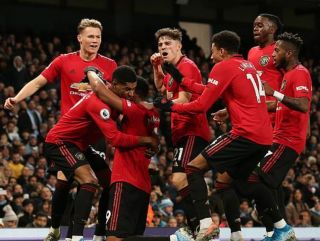 A week is a long time in football, and the feeling United fans woke up with on Sunday morning could not be more contrasting to that which followed the previous dismal draw at home to Aston Villa.

Ole Gunnar Solskjaer has masterminded a six-point salvo in just three three days, with consecutive wins over José Mourinho and now Pep Guardiola’s Manchester City – alleviating a substantial amount of pressure on himself in the process.

The final Manchester derby of the decade ended with United holding on for a deserved victory, the platform for which having been provided by a devastating counter-attacking first half display.

Roy Keane in his post-match comments labelled it as a ‘proper’ United performance, and from the very first minute it was exactly that. With only two changes to the starting eleven from midweek, the United players bounced into the derby having had a much-needed injection of confidence a few days previous. Even before Marcus Rashford opened the scoring from the penalty spot in the 23rd minute, United’s front three had worried City’s fragile back four on numerous occasions – breaking lines with quick, incisive passing and winning most, if not all, second balls.

There was a particular emphasis on getting the ball out to Daniel James on the right-hand side, who was up against the rather poor Angelino at left-back. James’ pace, as always, provided an invaluable outlet – with United realising that Kyle Walker’s pace would make him significantly more difficult to breeze past, even for someone as rapid as Rashford.

Of course, the foundation provided by the midfield pivot of Fred and Scott McTominay cannot be understated. Their tirelessness off the ball and conviction in possession not only nullified David Silva and Kevin Bruyne , in so much as they can be – it also allowed United to move the ball quickly into forward areas where the City defence had no option but to retreat given the pace they were faced with. Fred was just edged out for man of the match, but this was probably his best United performance to date – following on from previous best against Spurs. James, Lingard and Martial forced saves from Ederson, whilst Rashford hit the crossbar and also spurned a great chance having been played in by Fred – a move that stemmed from a City corner. However, United soon had just rewards for their forward foraging, with Martial’s delicately placed effort beating City’s keeper at his near post. It was a first half hour that City simply couldn’t cope with, and was United at their scintillating best. Special mention in that regard too for Jesse Lingard, who, as the most advanced in midfield, was responsible for setting in motion a lot of United moves with clever movement and didn’t allow Rodri to dictate the tempo of the game for City from deep.

As United sat off slightly coming up to half time, City had penalty claims turned down – but really only one clear chance with Gabriel Jesus’ header going wide. Naturally with a team of City’s ability, they were always going to apply pressure in the second-half – knowing their lingering title ambitions were at stake.

United’s defence was resolute throughout though, with Harry Maguire and Victor Lindelof picking an opportune time to have probably their best game as a partnership – and David de Gea making saves whenever necessary, from Rodri and Riyad Mahrez in particular. But it was Aaron Wan-Bissaka who was the standout performer, with a dominant display in completely nullifying Raheem Sterling – and basically anyone unfortunate enough to come up against him in a one-on-one situation. Stats show that he won 100% of his tackles in the game, and for me – he is absolutely second to none as a pure defender in the Premier League. For all that the modern full back is lauded as much for their attacking threat as anything else, for £50million you would hope that comes with some assurances over defensive capability – and Wan-Bissaka has provided that in spades. Perhaps the moment that best summed up his performance was the persistence in tracking a Sterling dash right across the face of United’s goal in the second half – before timing his goal-saving challenge to perfection. At his stage of development, attacking threat can be coached – but defensive prowess is priceless.

United did have some chances to take advantage of counter-attacking situations as City chased the game, but the final ball or right decision was lacking. Ultimately the defence held out, despite Nicolas Otamendi’s header making the final minutes a lot more tense than they ought to have been. So with the final whistle came raucous scenes in the away end – each of whom will not have minded one jot that they were kept in the stadium long after the final whistle. Ole and the players made a point of saluting them, with the favour being returned – and rightly so. They had just seen a glimpse of what this new United team can provide – confident, free-flowing attacking football ably assisted by resolute defending, after making life slightly more difficult for themselves. Much like Fergie’s United teams of old. The platform for a more promising second-half of the second has been built.