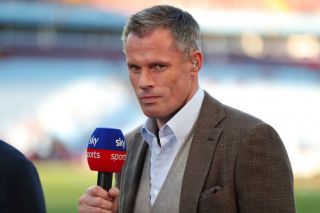 Former Liverpool defender Jamie Carragher believes Man Utd’s victory over rivals Man City was one of the finest performances he has ever seen.

After seeing off José Mourinho’s Tottenham in a 2-1 win last Wednesday, Manchester United won by the same scoreline at the Etihad on Saturday thanks to goals from Marcus Rashford and Anthony Martial.

Champions after defending the title last season, City were second best in all departments and Carragher was impressed with the way United performed.

“I think it is the best 30 minutes I have seen anyone play City in the past three years,” Carragher said on Sky Sports’ Monday Night Football (via the Mirror).

“Liverpool at Anfield, certainly, but this was away. I thought it was devastating and this was Manchester United at their best. It’s quality football at 100mph.

“A lot has been made of Manchester City but even City at their best, I think they would have found this difficult.

“At the weekend (United) were out of this world.”

Carragher enjoyed the result because of different reasons too, of course, with his former club now distant favourites to win the title this season.

The win was a big bonus for Solskjaer who started the week with his job in real doubt.

There’s no getting away from United’s poor start to the season, but wins over Spurs and City last week should give the lads the momentum they need for the busy festive period.

“I was watching this space between the midfielders, they were very narrow, that was clear,” Benitez said.

“A couple of throw-ins were shirt and they switched play both times. I think Solskjaer did a great job in terms of tactics and you have to have players who can do that but you need tactics to do that.”

It’s great to see Solskjaer get recognition for his work after a difficult period in charge, not helped by the fact Mauricio Pochettino was fired by Spurs and is now available for hire again.

Hopefully this is the turning point in our season.