The January transfer window is fast approaching and Manchester United must look to strengthen their squad.

Results against Tottenham Hotspur and Manchester City should not mask the fact that Ole Gunnar Solskjaer needs to be backed this winter.

As a minimum, United should sign at least one central midfielder and attacker in January; areas of the squad left bare after Romelu Lukaku and Ander Herrera were failed to be replaced in the summer.

READ MORE:  Man Utd loanee Chris Smalling could be out until new year with knee injury

As reported by the Athletic, Solskjaer has prioritised two central midfielders and a striker, with RB Salzburg’s Erling Haaland and Leicester City’s James Maddison top of the Norwegian’s wish list.

A move for Haaland seems feasible given his connection to Solskjaer while they were both at Molde, but a host of top European clubs will be after the youngster’s signature. Haaland is regarded as one of the most exciting young talents in world football and has scored 16 goals in just eleven games in the Austrian league so far this season (who scored) .

Meanwhile, James Maddison is seen by many fans as the answer to United’s creative problems. The Reds are brilliant on the counter-attack against sides that maintain the majority of possession, but struggle unlocking deep-lying defences.

The 23-year-old is unlucky that he has not found his way into Gareth Southgate’s England starting eleven yet after some wonderful performances under Brendan Rodgers this season. Leicester are currently second in the league and Maddison has excelled in a central midfield role, scoring five goals and contributing three assists already in this campaign (who scored).

However, while Maddison would be an excellent signing, it would prove very difficult to lure him away from Leicester who are  flying in the league and have a better, more complete squad than United at this stage.

A summer move may be more of a possibility, and the Athletic‘s report claims the Foxes would demand at least £100m for the midfielder.

Both Maddison and Haaland would improve United’s starting eleven, so we took a look at how the side could look if the pair were to move to Old Trafford.

The likes of Daniel James and Fred would be unlucky to miss out on this team based on current form, but this gives an idea of the squad depth United could have if they sign two or three first-team starters. 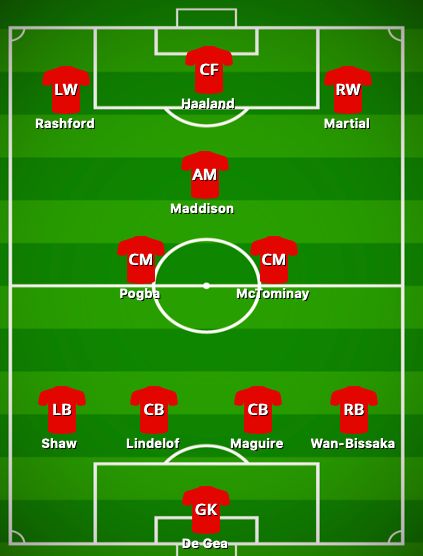