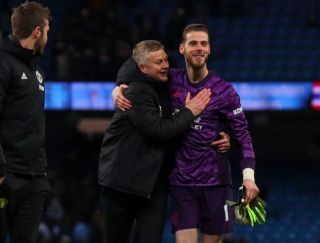 United were excellent, particularly in the first-half against Pep Guardiola’s side, with the frontline of Marcus Rashford, Anthony Martial and Daniel James rampant on the counter-attack.

Despite the Reds’ constant threat on the break, they were made to hold on under pressure from the champions late on.

De Gea, who has received criticism for indifferent form in the last 18 months, made two important saves to deny Rodri and then Riyad Mahrez in the latter stages.

“It’s in games like Manchester derbies you need nerves of steel and goalkeepers you can rely on. David de Gea is one of those keepers,” Crooks told BBC Sport.

“De Gea was the coolest man on the pitch and produced two saves in the latter stages of the game that, under the circumstances, were world class. That’s why he’s a world class keeper.”

The Spaniard has made some great saves in recent weeks and looks to be returning to the form that established him as one of the elite goalkeepers in world football. He had taken somewhat of a dip in form, perhaps because of a lack of concentration but his focus seems to be back which will be key for Ole Gunnar Solskjaer .

Alongside De Gea, Crooks also named United stars Aaron Wan-Bissaka and Victor Lindelof in his BBC team of the week; the pair put in monumental defensive shifts to hold out the world class City frontline.

Unsurprisingly, Marcus Rashford also made it into the team as he continued his goalscoring form to give the Reds the lead at the Etihad.