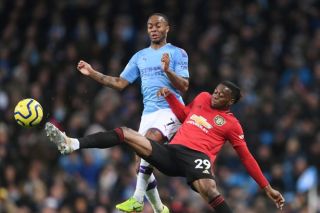 Goals from Marcus Rashford and Anthony Martial were enough to win the game at the Etihad.

The win saw United climb the table to fifth place — with the midweek victory over Tottenham also going in Ole Gunnar Solskjaer’s favour.

We currently sit five points adrift of fourth-place Chelsea, who were beaten by Everton at the weekend, so a bit of consistency between now and the New Year should see us in a much better position.

Four United players — David de Gea, Wan-Bissaka, Victor Lindelof and Rashford — made Crooks’ team of the week after their display against City, but it was AWB who was given high praise by the pundit, as quoted below.

“I’ve been banging on about Aaron Wan-Bissaka for nearly two years now,” Crooks write in his BBC Sport column. “I also said he was a Manchester United player if I ever saw one. His defending in the Manchester derby was nothing short of outstanding. Liverpool’s Trent Alexander-Arnold might be better on the ball but there isn’t a better defender in the country on his day than Wan-Bissaka.”

The 22-year-old has settled quickly since his summer move to Old Trafford and is already considered a key figure for United in their defence.

It goes without saying that he’s a better defender than Alexander-Arnold, but the former Crystal Palace full-back could improve his game going forward. Hopefully that will come as he develops.