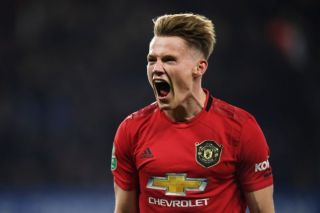 Man Utd are preparing to offer Scott McTominay a new contract worth £60,000-a-week, according to The Sun.

The newspaper claims McTominay currently earns a wage of £30,000-a-week so this new deal could see his earnings at Manchester United doubled.

This new deal could see the 23-year-old contracted to the Old Trafford club until 2025 — adding two years to his existing agreement.

McTominay has been brilliant for United this season, establishing himself as one of the first names on the team-sheet and a reliable force in a questionable midfield.

Nobody can question McTominay’s importance to this United side since he’s become a leader on the pitch. The Scotland international has been our best performer so far this season.

Although Ole Gunnar Solskjaer needs to dip into the market for new midfielders — especially if Paul Pogba’s future remains unclear — the Norwegian can rest assured knowing McTominay has a long career ahead of him at Old Trafford.

It looks like he will be one of the most important players that takes us through this rebuild process under Solskjaer.

We could be looking at a future captain too!