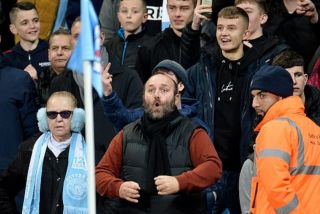 The man accused of racially abusing Man Utd midfielder Fred has been released on bail, Greater Manchester Police have confirmed (via Daily Mail).

The City fan faces a lifetime ban and it’s the very least he deserves for behaving like an idiot.

Football needs to have a zero tolerate stance on the likes of Burke and he should not be allowed to attend a football match again.

It’s been noted that Fred and Jesse Lingard both reported the incident after watching Sky Sports video footage of the incident at the Etihad.

Burke has denied any wrongdoing by posting the following on Facebook: ‘Listen. I’m only racist c*** because I had a screen shot that made me look it. However I ain’t racist, watch the match half of it was me putting my hands in my pants.’

He added: ‘Bullsh** not ar*** I know the true and I’ve already made appointment to speak to the police which I did so think what you like.’

Burke seems careless with his wording and grammar like he was with his behaviour on Saturday.

To Pep Guardiola’s credit, the City boss is believed to have spent time with Fred in the tunnel area after the match.

Though the former Barcelona manager didn’t coat himself in glory earlier this season when he staunchly defended Bernardo Silva after the Portuguese playmaker received a one-match ban from the Football Association for a racist tweet, as per The Independent. The post in question saw him compare team-mate Benjamin Mendy to a racist cartoon.

City decided not to appeal against Bernardo’s ban, yet are said to be of the view that the punishment was excessive.