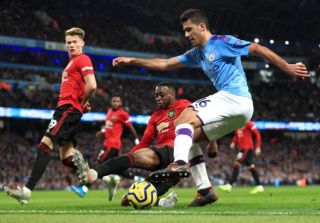 Man Utd had a surprising win over Man City this weekend and Aaron Wan-Bissaka was one of the star performers for Ole Gunnar Solskjaer’s side.

Pep Guardiola’s men were second best throughout the game while goals from Marcus Rashford and Anthony Martial in the first-half were sufficient enough to clinch an important set of three points.

Wan-Bissaka had one of his better displays for United and made BBC Sport’s team of the week, earning some high praise.

Former United midfielder Darren Fletcher has heaped praise on the 22-year-old, but also gave some constructive criticism on certain aspects to help him improve his game.

“He loves to defend himself. It’s refreshing to see, but he has to get better with the ball. Hopefully he is working on receiving and passing in training. I don’t see for myself that he’s going to be an attacking fullback who storms ahead,” Fletcher told Norway’s TV2.

“I was talking to some Manchester United players, and they were saying that no player has managed to pass Wan-Bissaka in training this season.”

Wan-Bissaka instantly looked a good buy when he came from Crystal Palace in the summer.

While there are aspects of his game that need improving, such as going forward and crossing the ball into the box, but his standard of defending has been second the none.

It’s only a matter of time before Gareth Southgate considers Wan-Bissaka for the England team, though at this moment in time Alexander-Arnold is definitely the preferred option for the Three Lions.