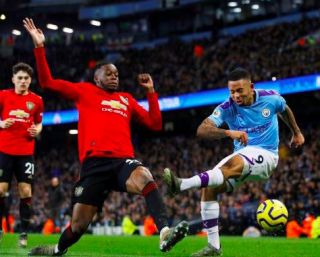 The full-back produced perhaps his best performance in a red shirt so far, nullifying the threat of Raheem Sterling.

We counted just one time Sterling found his way past Wan-Bissaka, who made numerous key blocks and interceptions as United held on in the final minutes.

The 22-year-old also ventured forward with more confidence than we have seen in many games, providing support for Daniel James and co on the United counter-attack.

Wan-Bissaka and his fellow defenders’ stability in defence provided the platform for a rampant United going forward in the first-half.

While he is often criticised for his lack of quality going forward, no one can doubt his defensive abilities. Wan-Bissaka is the best defensive full-back in the league, which he exemplified dealing with Sterling and Kevin de Bruyne who often drifted to the left.

See his stats from a monumental defensive effort below:

Sterling didn’t have a single shot on target. 🕷🕷🕷 pic.twitter.com/FiyMWkw7xv