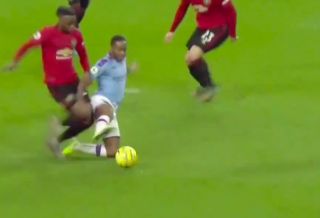 Aaron Wan-Bissaka’s performance to nullify the threat of world class winger Raheem Sterling in the Manchester derby at the Etihad was sensational.

Ole Gunnar Solskjaer’s side upset the odds with a stunning 2-1 victory, with the Reds rampant on the counter-attack against a City defence which had no answers in the first-half.

But a great deal of credit has to go to United’s defenders, who remained resolute in the closing stages to hold off some late pressure from Pep Guardiola’s side.

Wan-Bissaka was perhaps the standout defender on the day but praise also has to be given to Luke Shaw, who has struggled for first-team minutes due to injuries this season but kept the dangerous Bernardo Silva quiet on the flank.

Solskjaer’s side are now fifth in the league table after victories over Jose Mourinho’s Tottenham and Guardiola’s City in the space of three days.

Next up for the Reds is the final Europa League group stage game against AZ Alkmaar at Old Trafford on Thursday. Wan-Bissaka may be rested for next Sunday’s Premier League game at home to managerless Everton.

See highlights from his display yesterday: