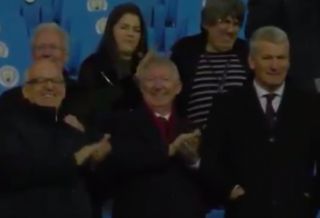 What a week it’s been for Ole Gunnar Solskjaer.

The United boss was under mounting pressure with the availability of Mauricio Pochettino causing many to question whether this would be a defining week for the Norwegian.

A 2-2 home draw to newly promoted Aston Villa did not help Solskjaer’s case, especially with what was yet come.

But back to back victories in just three days over Jose Mourinho’s Tottenham Hotspur and Pep Guardiola’s Manchester City have been remarkable and silenced those who want Solskjaer out of the job. For now anyway.

The Reds were scintillating on the counter-attack at the Etihad yesterday, and were fully deserving of their 2-1 victory.

Solskjaer set up to expose City’s frail defence and United could have scored three or four in the first half hour with the attack rampant against Guardiola’s vulnerable backline.

A stubborn defensive performance in the second half ensured Solskjaer sealed perhaps the most important result in his managerial career.

The victory prompted great scenes on the pitch at the final whistle, and here is a fantastic video of Solskjaer punching the air to celebrate with Sir Alex Ferguson.