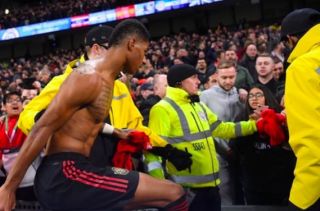 Marcus Rashford is in the form of his young life under Ole Gunnar Solskjaer at the moment.

The England international followed up a match-wining performance against Jose Mourinho’s Tottenham on Wednesday with another goal at the Etihad in United’s stunning derby victory.

Rashford calmly slotted the penalty after being felled by Bernardo Silva in the box to give the Reds the lead, but it was his threat on the counter that was so impressive.

The Wythenshawe Red looks to have found a home on the left-wing, where he is able to cause all sorts of problems for fullbacks with his trickery and pace.

And Rashford, who has now scored 16 goals for club and country this season, also made one lucky young fan’s day even more memorable by giving her his match worn shirt after the match.

The young fan, enjoying her first away Manchester Derby, thanked Rashford for his gesture on twitter.