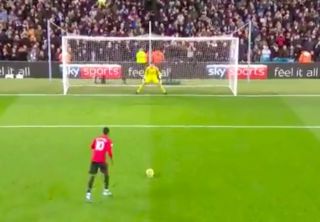 Manchester United have taken a deserved lead against Manchester City at the Etihad.

Pep Guardiola’s side have not been able to handle United’s attacking trio of Marcus Rashford, Anthony Martial and Daniel James on the counter-attack.

And United were rewarded with a penalty early in the first-half, after Bernardo Silva felled Marcus Rashford in the box.

The penalty had not been given originally, but a VAR check proved it was a stonewall penalty and Anthony Taylor pointed to the spot.

The Reds could be even further into the lead, with Rashford missing a golden opportunity to score his second on the evening.