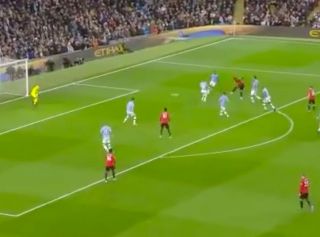 Anthony Martial has doubled Manchester United’s lead in a stunning start to the 179th derby at the Etihad.

United have been utterly brilliant in the first-half hour on the counter-attack, looking dangerous on every occasion going forward.

Pep Guardiola’s side have not been able to handle the blistering pace of Martial, Marcus Rashford and Daniel James.

Following another Reds counter, Martial played a one-two with James, before sneaking a left-footed shot beyond Ederson into the bottom corner.

Marcus Rashford had given United the lead with a VAR awarded penalty after he was bundled over by Bernardo Silva.

It’s been an incredible start from United who have shook the Etihad! Cmon, Reds!

"It's as good a 30 minutes from Manchester United that I've seen for a long, long time!"

What a start from the visitors…🔥