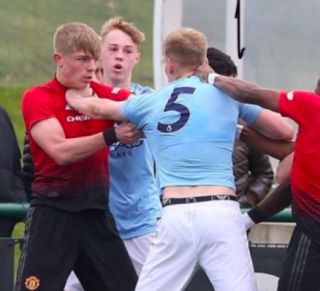 The highly-anticipated Manchester derby is upon us.

Ole Gunnar Solskjaer’s men are clear underdogs for the clash against champions Manchester City at the Eithad, but United will come with a confidence they can get a result after the victory over Tottenham on Wednesday.

City got back to winning ways with their thrashing over Burnley in midweek, but have exposed some defensive frailties that the Reds will look to exploit on the counter-attack.

One United player pumped up for the rivalry this evening is young full-back Brandon Williams. Unfortunately for the 19-year-old, he is again set to miss out on the starting eleven as we expect Ashley Young to retain his place at left-back.

Williams has been brilliant since breaking into the first-team this season, but an experienced head is needed for such a huge test and he could return against Alkmaar in the Europa League on Thursday.

But Williams certainly understands the importance of the Manchester rivalry, as he posted a photo on his Instagram of himself involved in a scrap in a youth team derby.