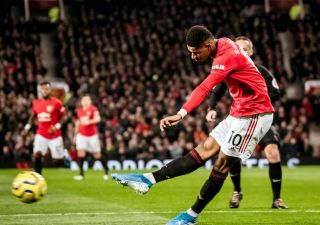 Victory against Spurs has eased the tension going into what otherwise would have been a pressure cooker situation for Ole Gunnar Solskjaer. Whilst the heat will most certainly be on, the impressive home display gives some cause for optimism against a City defence shorn of confidence.

It is a massive boost for United that McTominay slotted back into the midfield like he hadn’t been away. Another dominant display from the Scot prevented Spurs from getting a foothold mid-week and he offered much needed protection in front a back four brutally exposed in recent games.

Rashford was on fire against Spurs and he can consider himself very unlucky not to have bagged a hat-trick. Based on bis post-match comments, José had clearly schooled the Spurs defence about Rashford’s ability to drift in from the left and create havoc, a lesson from which they failed to learn. It may well be another opportunity for Greenwood in the middle, so a key battle will be between England team mates Walker and Rashford.

This is a game that perhaps suits United, problems have surfaced whilst in possession where the Reds have failed to break down so called ‘lesser teams’. United can expect to be pinned back for large periods on Saturday but the opportunities should be there to break at pace and create real problems for City. Daniel James in particular should be able to flourish and give Otamendi and Co a lot to think about.

It seems likely that Ole will go with Young again at left back, the rest of the team essentially picks itself however there is a question about whether Lingard gets the nod ahead of Pereira after Andreas’ indifferent showing against Villa. Given the industry that Lingard provides and the threat United posed against Spurs, it would be a surprise if Ole changed anything in the middle of the park, particularly if as seems likely, United rely on pace to beat City.

Despite the relative disparity in league positions, this match is finely poised with both sets of fans unsure of where the balance of power lies. It is an intriguing encounter that on paper looks full of goals, so nil-nil is nailed on. For their part, City arrested a series of underwhelming performances with a resounding away victory at Burnley. Nonetheless they failed to keep a clean sheet and it is said that the Lord works in mysterious ways, so a lot will depend on whether Jesus decides to turn up or not.