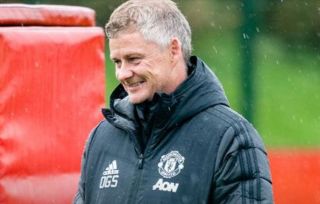 Ole Gunnar Solskjaer has given an injury update on Anthony Martial and Paul Pogba ahead of the Manchester derby.

Man Utd travel to the Etihad on Saturday looking to build on Wednesday’s brilliant performance and 2-1 win over Tottenham.

A win would certainly put us back in contention for a top-four finish which should be Ole Gunnar Solskjaer’s aim by the New Year.

We are not expecting an easy task against Pep Guardiola’s Man City despite their dip in performance levels this season, but the lads has every chance if go into the game like they did against Spurs.

Solskjaer would have been hoping to have a close to fully-fit squad available for the big game.

But there’s mixed news as far as United are concerned.

While Solskjaer suggests Martial could face City, Pogba has been ruled out as he continues his recovery from injury.

“We hope to have Anthony, definitely, for part of the game,” Solskjaer told the official Manchester United website. “I am not sure he is able to start.

“Paul probably won’t be available, no,” he added. “We expect him back as soon as possible, as quickly as possible. He’s out on the grass training. I said [he’ll be back] in 2019, so hopefully we’ll see him before the new year, definitely.”

It sounds like Martial will be used as a sub against City, but it’s a shame to hear we’ll be without Pogba again.

Hopefully it won’t be long before Solskjaer can call upon his French duo in the same line-up.