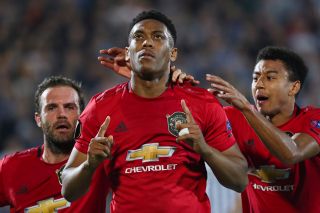 Ole Gunnar Solskjaer says Anthony Martial will be out for a ‘little while’ after he was ruled out of Wednesday night’s 2-1 victory over Tottenham at Old Trafford.

The Frenchman was replaced up front by Mason Greenwood, and the teenager put in a fine performance in his absence.

Despite the Reds coping well without Martial against Jose Mourinho’s side, Solskjaer will hope he can return as soon as possible.

When asked about how long Martial will be out for in the post-match press conference Solskjaer said, as quoted by Manchester Evening News:

“A little while – how long is a piece of rope?”

“Of course you want to have your first XI, your biggest and best players all of the time, and I’ve done that once against Chelsea, and maybe Wolves. But it’s a squad game and the subs are so vital.”

Solskjaer should be mindful not to rush Martial back from injury if he is not fully fit and he is now a doubt for Saturday’s derby at the Etihad.

If Martial doesn’t recover, Greenwood may get the opportunity to start again on Saturday in a front three alongside the in-form Marcus Rashford and Daniel James.

The victory over Jose Mourinho was a huge hurdle to overcome for Solskjaer with pressure mounting on his job, but the game against City away is another step up and any result at the Etihad will be a bonus for the United boss.