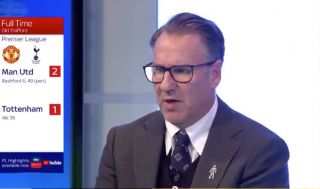 Man Utd picked up an important three points against Tottenham Hotspur on Wednesday night and Marcus Rashford was the star of the night.

Throughout the game the Red Devils had control and José Mourinho didn’t have his own way on his return to Old Trafford.

It was Mourinho’s first game back as a manager since getting sacked by United almost a year ago, and his Spurs players came up second best to Ole Gunnar Solskjaer’s men.

United knew they had to pull a win out of the bag or else they’d continue to slip down the table and lose grip on the race for a top-four finish.

He described United’s performance as “outstanding” and said Rashford was “unplayable” at times, as seen in the video below:

It’s worth noting how Merson praises Fred too. The Brazilian had one of his better games for the Reds last night.