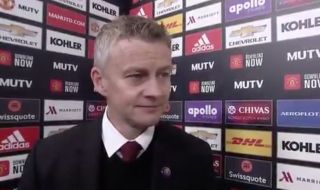 Ole Gunnar Solskjaer spoke to MUTV after the match last night and was delighted with his team’s efforts in the 2-1 win over Tottenham.

Two goals from Marcus Rashford sealed the win for United. The first, a cracker, with Rashy cutting in from the left flank to hammer the ball past Paulo Gazzaniga.

His second of the night came from a spot kick he earned and it was enough to cancel out Dele Alli’s equaliser to grant United a very important set of three points ahead of Saturday’s Manchester Derby.

Solskjaer was happy to have Scott McTominay back as he showed great leadership in the middle alongside a much improved Fred, who seems to enjoy playing with the Scotland international.

It will go down as one of United’s best performances of the season to date, but it’s important they build on this for the game against City and beyond.

Check out Solskjaer’s post-match interview below, courtesy of MUTV:

💬 The boss gives his verdict on a brilliant #MUFC performance! pic.twitter.com/LdFIvUbPc9