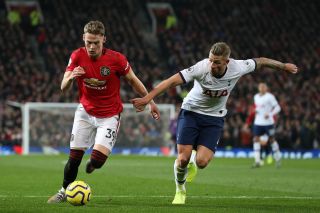 Much of the pre-match build up before United took on Tottenham was riddled with trepidation, dread and predictions of a cold Mourinho vengeance making Ole Gunnar Solskjaer’s position as United manager as vulnerable as the Portuguese was about to discover this time last year.

These were valid concerns among United fans, in no small part due to United’s midfield in the Sheffield United and Aston Villa matches looking as invitingly open as Santa’s grotto must appear to the youngsters of today. ‘Tis the season after all. There was one overriding reason behind the evident fragility in the engine room — the absence of Scott McTominay.

Previously ridiculed and derided as a mere Jose Mourinho favourite and a supposed symbol of how far United had nosedived in the post-Ferguson years, any arguments against McTominay becoming not only a favourite universally and being one of Solskjaer’s first names on the team sheet are given short shrift.

With good reason too, I hate to add. Mourinho had his finger on the pulse long before anybody else, which is why he went out of his way to add a manager’s player of the season award to the more customary end of season silverware the club hold. McTominay was the winner, singled out for special praise due to his unwavering commitment and exemplar attitude.

As we have seen in recent years commitment and attitude, which in an ideal world would be bare minimum prerequisites, such is the honour of playing for United, have fallen by the way side in certain circumstances — predominantly with a certain Frenchman playing in McTominay’s area of the field. Some will quite rightly question why those two traits deserve to be lauded in the form of silverware, when many men would give everything to play for the club, but if fans love one thing it’s showing fight for the shirt and passion for the badge.

You do get the impression that Scott McTominay sees the badge on his left pectoral muscle as a genuine honour.

This time last year, as Mourinho’s reign was whimpering to a sombre end, McTominay, now United’s worthy big game player, did not even make the matchday squad as United put up the white flag in the worst possible of places (Anfield). Few could have envisaged just how meteoric his rise has been in a mere 12 months, much like his growth spurt at 18.

Fred has been a picture of passivity and timidity in McTominay’s absence, having to almost babysit Andreas Pereira at times, given his poor form. With that token, you can almost forgive Fred for perhaps reining his game in a couple of notches. Pereira was benched for the Tottenham match and McTominay’s return, given the magnitude of the game, was certainly hastily fast-tracked. Solskjaer openly admitted as much at full-time, citing just one training session with the reserves was enough for McTominay to feel ready for the game. On face value, McTominay’s mere presence alone makes Fred feel ten foot tall and we witnessed unquestionably Fred’s best game for the club against Spurs — it was like he was given an intravenous of Scottish reassurance and it was coursing through his veins.

It’s worth going back that word, commitment. In this era of, how should I say, ‘protective’ footballers regarding injuries, McTominay is a rare breed where he will put the team before personal recoveries. It has got to the point where confidence is automatically lifted with McTominay’s name on the teamsheet and he is certainly the first midfielder Solskjaer pencils into his eleven.

Going on social media is invariably a dangerous game, in this evolving era of millennial keyboard warriors, yet I still find enough time to incorporate it into my weekly United routine. On these medium I still see United fans protesting that United have not replaced Ander Herrera who, let’s not forget, was quick to state his love for the club but equally quick to chase the money the Parc Des Princes bench has to offer. The only logic behind that statement is in number alone, as McTominay is playing the Herrera role magnificently: He loves riling up opponents, strong in the tackle, tenacity personified, the only difference is I don’t see the Scot chasing money in the twilight of his career.

There is a lot of substance to the old footballing adage of ‘win the midfield, win the game’ and it is fair to say that Harry Winks and Moussa Sissoko were upstaged at Old Trafford. I do not want to get a reputation as a Pereira basher, but I highly doubt United would have won had it been the tried and failed duo of him and Fred in the engine room.

Solskjaer could not have worded it better at full-time when saying Scott McTominay was the type of player he wants at Manchester United: Commitment, heart, dedication, fight, grit and quality. Is it any wonder he is being earmarked as a future captain of the club?

McTominay will never get the acclaim poured over the likes of Kante, Fabinho and Fernandinho. He is not at their level, far from it, but I get the feeling he is horribly underrated among our footballing experts.

Keep going under the radar, Scotty!

McTominay is showing leadership beyond his years and is a driving force of the Solskjaer plan.

It’s fair to say he is no longer a Mourinho yes man.