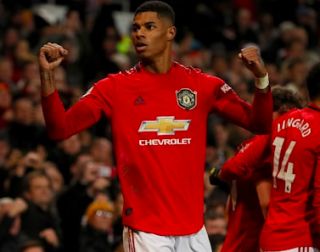 Marcus Rashford is doing some fantastic work off the pitch as well as on it.

The England international scored twice to defeat Jose Mourinho’s Tottenham Hotspur 2-1 at Old Trafford on Wednesday evening as United moved to sixth in the league.

Rashford played as if he had a point to prove in his best performance of the season for the Reds. He has now scored 15 goals for club and country since the start of the campaign.

This winter, Rashford has introduced an ‘In-the-Box Christmas Campaign’ in partnership with Selfridges Manchester Exchange.

The campaign aims to tackle the problems with homeless in Manchester, providing care packages with essentials for the cold weather.

Living in the Manchester City centre, the homelessness issue is unavoidable and it’s fantastic to see such a high profile name looking to make a change.

Rashford is giving back to the community and has received some great feedback from fans of his work, an example being the letter in the tweet below.

The 22-year-old was responding to a letter sent from a year 7 student pledging to contribute to the campaign.

See how you can also help Manchester’s homeless here.

Still time to get involved guys so head here for all the info 👉🏿 https://t.co/aUt4Czfi14 👊🏿 x MR pic.twitter.com/VqSunrI9e8