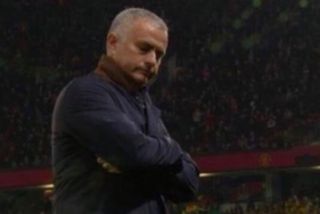 Marcus Rashford was on fire in Manchester United’ 2-1 victory over Tottenham Hotspur.

Rashford played like he had a point to prove; a constant menace to Serge Aurier down the Spurs flank and almost scored a wonder goal which was brilliantly saved by Paulo Gazzaniga.

And the forward’s brother, Dwaine Maynard was quick to take a shot at his former manager shortly after the Reds had secured victory.

The image, which was posted on his Instagram, refers to Mourinho’s expression when Rashford missed an opportunity against Young Boys in the Champions League last season.

At the time Rashford was going through a barren spell in front of goal, and seeing his manager turn away and shake his head would not have done his confidence the world of good.

But under Ole Gunnar Solskjaer, Rashford’s confidence is sky high and he now has 15 goals for club and country this season. He’ll be looking to add to his impressive tally from the left-flank in the Manchester Derby on Saturday evening.

Doubters just spur me on 🤷🏾‍♂️