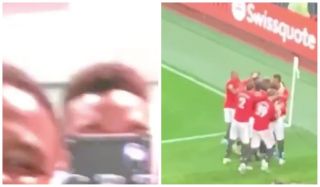 Paul Pogba hasn’t played a lot of football this season but he was buzzing at Old Trafford after Marcus Rashford put away his penalty to make it 2-1 against Tottenham Hotspur.

The France international is on the path to recovery and Ole Gunnar Solskjaer will hope to have him back fit for Saturday’s Manchester derby.

Unlike previous outings against Sheffield United and Aston Villa, United were able to control the game in midfield following Scott McTominay’s return from injury. You’d think things can only get better with Pogba yet to come back.

In the video below (via @utdxtra), Pogba is quoted as saying:“Come on my boy! Number 10 and all that! Rashy… mad ting!”

The sooner he’s back the better!