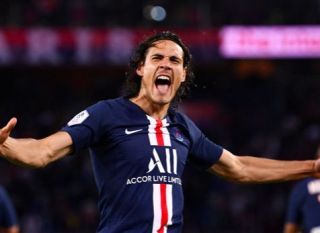 Louis Saha thinks Manchester United should sign Paris Saint-Germain striker Edinson Cavani to get the best out of Marcus Rashford and Anthony Martial.

Ole Gunnar Solskjaer has been left light in attacking options this season after no replacement was signed for Romelu Lukaku or Alexis Sanchez in the summer.

Centre forward is an area that should be prioritised by Solskjaer in January and Vice-Executive chairman Ed Woodward has to back his manager in the transfer market.

Despite United’s crucial 2-1 victory over Jose Mourinho’s Tottenham Hotspur at Old Trafford on Wednesday night, Solskjaer’s side still sit sixth in the league and eight points behind fourth placed Chelsea. Added fire power up front is a necessity if United are to close the gap.

And former United striker Saha thinks Uruguay international Cavani is the player that should be on Solskjaer’s radar.

“Manchester United are the Premier League team that need to strengthen the most in January and they should look at signing Edinson Cavani from PSG,” he told Bwin.

‘They need to bring in players to challenge the existing players and create competition; Cavani would push Rashford and Martial and make them even better.”

The 32-year-old scored 20 Ligue 1 goals for the French champions last season and has two in four appearances this campaign (whoscored).

According to a report in October by L’Equipe , as sourced by the Mirror,  United, Atletico Madrid, Juventus and Inter Milan are all in a race to sign the striker.

Cavani has been a prolific goalscorer during his seven seasons in Paris, establishing himself as one of the elite strikers in world football.

He is now coming towards the end of his career, but the Reds may be tempted to make a cut-price January offer with his contract set to expire next summer.