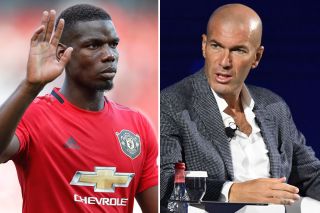 The likelihood of Man Utd’s Paul Pogba moving to Real Madrid appeared to take a blow in recent weeks with the La Liga outfit said to have cooled their interest on the midfielder.

But there has been conflicting reports in Spain over the potential transfer of Pogba. AS claim the emergence of Federico Valverde in Real’s midfield has left manager Zinedine Zidane doubting whether the Manchester United star is needed at the Bernabeu.

However, Marca now report Zidane remains determined to sign the World Cup winner, suggesting that one of his conditions for accepting the reappointment as Los Blancos’ head coach in March was that club president Florentino Perez would sign Pogba.

It sounds like Zidane believes Pogba is the missing piece in the puzzle, though there will be question marks over his future as manager if Real Madrid end the season trophy-less and that is worth considering with every player the Spanish giants are linked to for the foreseeable future.

That said, Madrid are currently sat in second-place in the La Liga standings, level on points with leaders and reigning champions Barcelona, and they’ve already booked their place in the Champions League knockout phase as runners-up to PSG in Group A with one game left to play.

Valverde, 21, made his first start for Real Madrid in their 2-0 win over Osasuna in September. He is a creative player who plays on the left side of central midfield — similar to Pogba.

A standing ovation, and Valverde chants from the Bernabeu. And rightly so, one of the main reasons why we transformed since that Mallorca horror performance. Federico Valverde. The truth.

“[His is] a rise that has left the Pogba soap opera forgotten and that justifies the bet that the club made in summer to extend his contract two years (until 2025) and insert a clause of €750m, the same as other heavyweights in the white shirt,” write Mario de la Riva in AS.

Pogba has missed most of this season with an ankle injury and we are still none the wiser about his return date. He is not in the matchday squad to face Tottenham tonight, so hopefully the Manchester Derby on Saturday will mark his eagerly awaited return.