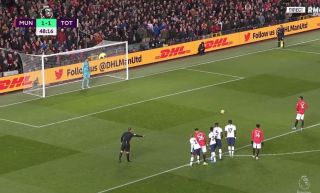 Man Utd take the lead against Tottenham Hotspur for the second time with the scoreline now 2-1.

Marcus Rashford scored from the penalty spot to net his second of the night.

The England striker has played with fire in his belly tonight looking determined to show his former manager, José Mourinho, that he should have put more faith in him.

Ole Gunnar Solskjaer has trusted Rashford from the moment he replaced Mourinho.

We’re starting to see him at his best this past month. He has scored nine goals in his last 10 games for United. What a tally!

Watch the goal below, courtesy of NBC Sports: