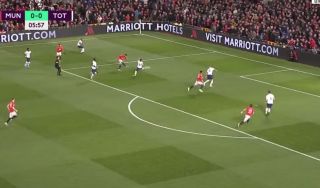 Marcus Rashford has opened the scoring against Tottenham Hotspur at Old Trafford with his 11th goal of the season.

After just 7 minutes of play, Man Utd have took the lead against José Mourinho’s new side. It certainly looks like the United players are out to make a point against their former manager.

That’s the sort of response they should be trying to give coming into this game with pressure building on current manager Ole Gunnar Solskjaer, who has put far more trust in his players than Mourinho did a year ago.

Rashford was a player Mourinho didn’t really fancy at United, so the goal will mean extra to the England striker.

He’s been in great form for United this past month and his goal was something else.

Cutting in from the left flank, Rashford hammered home with a powerful strike as United took a 1-0 lead.

Watch the goal below, courtesy of RMC Sport: