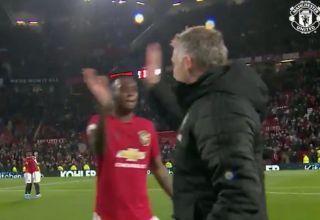 The Manchester United manager has been under pressure of late with results getting worse and Mauricio Pochettino becoming available after his sacking at Spurs.

But the manager will be delighted with tonight’s display which saw United gain a deserved three points.

Solskjaer showed he delight at the end of the game as he took to the pitch to celebrate the win with his players.

The gesture was followed by one to the crowd as Solskjaer gave a fist-bump towards the Stretford End.