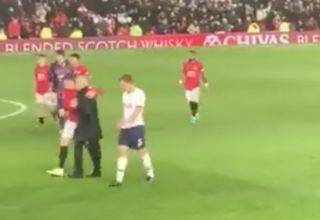 José Mourinho returned to Old Trafford for the first time tonight as a manager since he was sacked by the club almost a year ago and showed some class.

The former Manchester United manager is now in charge of Tottenham Hotspur and watched his side tonight lose 2-1 as the Red Devils picked up a deserved three points.

I expected Mourinho to bring a better game plan to the game tonight, but United had control throughout the game and that will bother the Portuguese when he thinks back to the match.

Some will fire aim at José for upsetting certain players during his time with United, but tonight he put that aside.

And full credit to him. Mourinho took time after the match to congratulate some of his former players after they beat his current side — with two important goals from Marcus Rashford, who earned high praise in our player ratings.

Watch the video below as Mourinho shows some class: