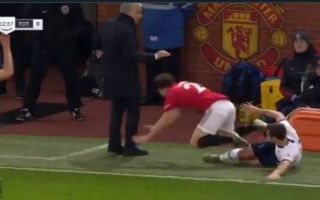 José Mourinho was close to getting a serious injury on his return to Old Trafford.

The newly appointed Tottenham Hotspur manager was left rubbing his leg in pain after Daniel James crashed in his knee on the sideline.

Had James hit Mourinho a few inches to the left, Mourinho could have ended up enduring a much more painful experience.

See the clip below, courtesy of NBC Sports:

A physical start to the match, Daniel James collides with José Mourinho. pic.twitter.com/TbtXPnNGIK