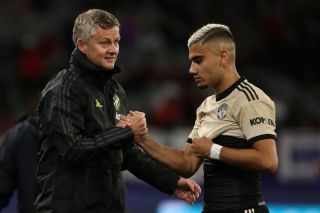 Man Utd have been woeful this season and some fans feel Ole Gunnar Solskjaer is guilty of starting certain players on merit.

The Red Devils find themselves eight points adrift of the top four ahead of Wednesday’s clash with Tottenham.

Solskjaer appears to be keeping his options open when it comes to team selection, though it will be interesting to see if Brazil international Andreas Pereira starts the game tonight after a string of terrible performances.

“Players are never undroppable,” the Norwegian said (via Four Four Two). “Players are also playing for their place in the long-term.

“We have a situation at the moment where we’ve had injuries, so players have played. I’m not talking about [Andreas] Pereira or Anthony [Martial] or any one particular player.

“But I’ve been part of a squad where you’re never guaranteed a place in the team. That’s where we’re going to get to at this club as well.”

Pereira has not done enough to warrant a starting role at United and we’d much prefer to see James Garner given more opportunities to stamp his mark on the team.

Martial, also mentioned by the boss, misses tonight’s game supposedly due to injury.

There is also pressure on Solskjaer to get results with the availability of Mauricio Pochettino following the Argentine’s sacking at Spurs.

At least Solskjaer admits his side have not been good enough this season.

“We’ve fallen behind a few times this year and we’ve turned it around,” he added. “But we’ve been leading as well and given the lead away.

“I believe in these players and that we can win any game on any given day. For me, when we get players back, when we’ve got the full squad fit, I’m sure we can challenge and move up the table.”

It’s going to be a big ask to get a win tonight. Spurs are in better form since the appointment of José Mourinho, who returns to Old Trafford for the first time as manager since his sacking almost a year ago.

We’ll know soon if Pereira gets the nod again.