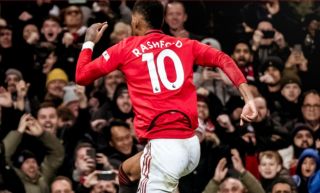 Manchester United have won a game!

Shades of the side that rocked teams in the early Ole Gunnar Solskjaer era were evident as Marcus Rashford scored two goals to help United to a 2-1 win over Jose Mourinho’s Tottenham Hotspur.a

The match proved a few things for concerned United fans; firstly, that this young core of players at the heart of the club are willing to give everything for the side, and secondly, that the Red Devils do have the quality to win matches and are not as far off the Premier League’s best sides as it seems.

Individual performances were as important today as the team’s display overall, and that is reflected in the player ratings for the night.

After being relatively untested for most of the match, de Gea produced a few important saves to ensure the win for United at the end of the 90 minutes.

Wan-Bissaka was at his usual best from right-back, defending his flank with ease and darting forward to join the attack when possible. His crunching tackle in the 94th minute was a fitting way to end the match.

Lindelof is once again beginning to show his best form at the back for United. After a man-of-the-match display against Aston Villa, the defender was responsible for many clearances and started many attacks for United against the manager who brought him to the club.

Perhaps a little bit shaky of late, Maguire showed exactly why he has improved United’s defence massively today, with a commanding display of leadership and aerial ability at the heart of the back four.

Despite the improved performance from many United players, Young struggled today, allowing Dele Alli to turn him over for the Spurs goal and leaving his flank open for Serge Aurier to cross the ball almost freely during the second-half.

Having Scott McTominay back in the side is brilliant for United, as his ability to shield the back four vastly improves his side’s ability to prevent opposition attacks. McTominay also adds plenty to the midfield with solid composure and decision-making, which enables Fred to be the more fluid of the duo.

Arguably one of Fred’s best performances for United. He was everywhere, sliding passes through to United’s attacking midfielders while also preventing counterattacks by anticipating the play. More matches like this will go a long way towards proving he can be an important member of the setup.

James had a quieter day from an attacking front, but his constant desire to make an impact on the ball and his immense work-rate ensured that his contributions were more than adequate for the night.

Some reminiscence of the old Lingard tonight. Lingard was a key cog in United’s early-Solskjaer form due to his ability to connect midfield and attack with his movement. Losing much of that in 2019, he showed that it can still be in his locker with an effective display tonight. Lingard will not be United’s long-term answer in attacking midfield, but he can certainly be an option if he plays this well.

It is easy to be critical of Rashford at times, but only because he can produce performances like the one tonight. Capitalising on early errors to give United the lead, he then proved far too much to handle for Spurs and sealed the win with the penalty he earned himself. He could have easily scored more, too.

While he didn’t do much wrong and contributed to the flow of United’s attack well, Greenwood was somewhat of a passenger in this match, as reflected by the fact that he was the first of United’s forwards to make way in the late stages.

Pereira works very hard and deserves credit for it, but he too often looks lost in games. His inability to retain possession and win duels in midfield could have costed United the three points even though he only played for 10 minutes.

Shaw didn’t do anything worth criticizing, but he also didn’t really have the time to do so tonight, replacing Lingard and playing left-wing for the last 10 minutes of the match.