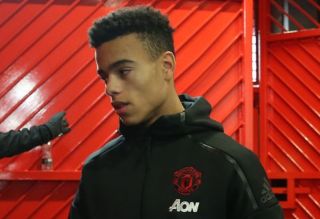 Mason Greenwood is highly thought of at Man Utd and a number of fans have called for the young striker to start tonight’s game against Tottenham.

The future looks bright for Greenwood even though he has yet to achieve consistent first-team opportunities under Ole Gunnar Solskjaer — making a total of 11 appearances in the Premier League this season.

And following Anthony Martial’s reported injury, as per Sky Sports, United fans have took to Twitter to demand the youngster gets a chance to start against Spurs.

With pressure building on Solskjaer to get results, The Sun has tipped the Norwegian to start with a back-five against José Mourinho’s side.

Spurs may be scoring goals at the moment but they’re also leaking at the back and maybe that should persuade Solskjaer to go for it tonight, as opposed to packing his defence with an extra centre-back.

See below as United fans call for Greenwood to get the nod against Spurs:

Give Greenwood chance to start 🙏🙏🙏

Greenwood should start up top then ..No excuses

A real pain in the backside that Martial is injured tomorrow night. Would much rather us just put confidence in Greenwood and start him upfront rather than put Rashford back there when he’s shown he’s much better out wide. That’s why we let Lukaku and Sanchez go after all.