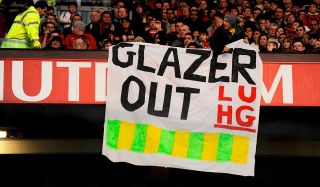 The Labour Party are reportedly set to introduce new powers to football fan groups — such as MUST — if they win the General Election on December 12th.

Labour are proposing plans to give fans more power at their football clubs, with the ability to buy shares in the club and remove board members.

“[We] will put fans at the heart of football by giving them a far greater say over the way their clubs are run,” Labour’s shadow sports minister, Rosena Allin-Khan told the Telegraph.

“We will provide them a say over who their manager is, allow safe standing, and make sure all stadiums are fully ­accessible.”

This would apparently give fans power over decision-making on the hiring and firing of managers — which will interest United fans, unhappy with certain calls made by vice-executive chairman Ed Woodward and the Glazer family.

Though, even if this does happen, we are unsure what actual difference if it would make at Old Trafford since the Glazers have never been interested in how fans feel about the running of the club.

With current manager Ole Gunnar Solskjaer coming up short when it comes to results on the pitch, Mauricio Pochettino has been heavily linked with the United job, as per the Manchester Evening News, but the Norwegian appears to have the backing of the board for now.

Football clubs, in our eyes at least, are community assets that have been captured by the likes of the Glazer family, whose only interest is to turn Manchester United into a commercial cash cow. They have no real idea about what it means to the greater community and never will.

The real question is how do we change the model in the Premier League to have a system that allows football owners and fans to compromise on various decisions — from where it is now.

Labour leader Jeremy Corbyn has spoken of his admiration for the German model of football fan club ownership as it’s more democratic. He used a podcast interview with When Saturday Comes to put pressure on Premier League clubs to do more about high ticket prices, which are undoubtedly pricing out working-class communities, and supporting the grassroots game.

“I get very frustrated about the cost of football, the cost of going to matches, the cost of season tickets and the way in which working-class communities are almost priced out of it” https://t.co/6AaW8KUSA4

Corbyn is of the view that fans’ voices need to be heard on club boards. The following was said after a Labour rally in Liverpool (via The Guardian): “Germany has a much better, more democratic football model and it’s very successful. I’m very interested in the model of Bayern Munich and others.

“The involvement of fans in football in Germany is so much better because, while fans all have opinions about football, some of them are actually very skilled and knowledgeable people who could bring a lot of good to the club.”

Safe standing – another issue discussed by Ms Allin-Khan – has already got the backing of the three main political parties in Labour, the Liberal Democrats and the Conservatives.