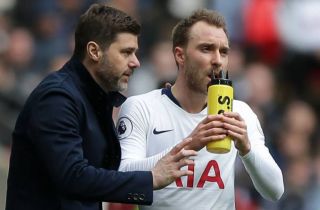 As part of our build-up for Man Utd vs Tottenham Hotspur, I caught up with Harry from the Harry Hotspur blog.

We discuss a number of topics ahead of the game, such as life with José Mourinho and Mauricio Pochettino’s future.

A big thanks to Harry the answering the following questions:

José, the moody one. Do you have any concerns about him taking over knowing himself and Daniel Levy are bound to clash at some point?

I don’t buy into all the ‘plague of locusts’ stuff that Jose dementors seem obsessed that he’ll bring with him.

He’s had problems with many of the clubs he’s been at because of two key issues. One, the world doesn’t revolve around him and two, most football clubs are run by people you wouldn’t want to be trapped in a lift with.

READ MORE: 3 things to watch out for during Manchester United v Tottenham clash

Levy spent weeks talking with Mourinho, I have a feeling that they might have discussed prospective flash-points, such as budget etc.

Some Spurs fans will be sat there right now, willing this to fail.

Me? I’m still in a state of blissful shock that we’ve finally signed up a manager with a proper CV.

So far Jose’s been charm incarnate, and perhaps at 56, he’s mellowing out a little?

Either way he’s a serial winner – or was up until now, lol.

The players became fed up with Pochettino. Does that annoy you considering all the brilliant work he did for Tottenham?

You have to understand that there is one grave and constant factor at THFC, and that’s Daniel Levy. One trophy in nigh on 20 years didn’t happen by chance.

This is the man who knocked down a perfectly good football stadium and built a shopping centre in its place.

Pochettino compromised himself out of a job. We were the only supposedly top flight side in ANY of Europe’s big 5 leagues not to buy a single player in two consecutive transfer windows.

The squad naturally became stale, there was no churn of players and can you imagine how sick of his voice they all became?

What would you say to United fans who criticise Pochettino for not winning any silverware?

Of course I would say they are right. Here we had this guy who was a failure when he left Espanyol, did nothing at Southampton, who has won NOTHING who sat in the media room at Spurs and told the world that domestic cups wouldn’t change anyone’s life. It was all about the league and the Champions League.

This is like your teenage daughter telling you she doesn’t want the second-hand hatchback you were going to get her for Christmas, she’s holding out for a brand-new Range Rover.

Pochettino is one of life’s perennial losers.

Pochettino to United. Do you see it happening?

Tragically, I can. I can see you having another David Moyes on your hands, except this one keeps telling everyone he’s “Berry Happy”.

BTTS! I think we’ll beat you, and fail to keep a clean sheet.

Any finally, do you fancy taking Matic off our hands and giving Eriksen in return? I would be forever grateful.

I’m not convinced you want Eriksen to be truthful. He’s an untrustworthy little creature and I’m not sure how attractive he would be to anyone.

Matic should go to Juventus and give us all a break.