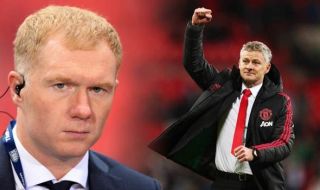 Pressure is mounting on the Norwegian as the Reds sit ninth in the league table, just six points off the relegation zone after 14 league games.

It’s the worst start to a United season in 30 years and while there is an understanding that there is a huge rebuilding job at Old Trafford, many have began to doubt if Solskjaer is the man to oversee it.

The Reds were dominated in large parts of the game against newly promoted teams Sheffield United and Aston Villa, dropping four points and losing further ground on the contenders for the Champions League positions.

Solskjaer is not entirely to blame; he is dealing with a squad that is not good enough and would need to be backed by Ed Woodward and the Glazers for multiple transfer windows to have a chance of competing.

However, many fans are questioning whether a more elite manager, such as a jobless Mauricio Pochettino, would get better results from the current crop of players.

Scholes, meanwhile, has urged the club to give his former teammate time to get things right at Old Trafford.

“They’ve had three managers now before Ole’s come in and they’ve got to stick with someone, they have to,” Scholes said (via the Daily Mail).

“They have to give him the time, three or four transfer windows I think they need.

“About two or three weeks ago they were playing really well, playing good football and you think ‘Maybe they’re not too far away’.

“And then they have a spell again, a couple of injuries, a couple of big injuries and you’re thinking again ‘They need three or four transfer windows’.

“Hopefully Ole’s the man to get the time and money to spend.

“They need to improve, players. Fred, [Andreas] Pereira, it’s their chance now to shine, they haven’t quite done that.

“The top four teams look a lot better than United do at the minute. Don’t get me wrong, United can go on a run.

“It doesn’t take too long for it to all change around, especially over the Christmas period where there’s a lot of games.”

Solskjaer’s Reds take on Jose Mourinho’s Tottenham on Wednesday before a trip to the Etihad to face Champions Manchester City in what could be a make or break week for the Norwegian.