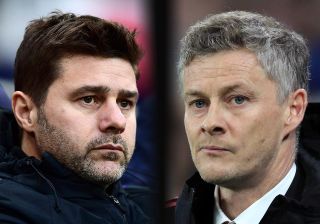 Manchester United’s worst start to a season since 1988/89 continues as the calls for Mauricio Pochettino grow ever louder.

Sunday’s performance was a new low for Ole Gunnar Solskjaer and his young side. The Red Devils have taken two points from their last two games against newly promoted teams and things could have been a lot worse. The Norwegian admitted his men didn’t deserve to win but his assessment of what is needed to turn things around was far from reassuring. “As soon as we get a run of three or four games together here now, that’s what we need.” He said (via Sky Sports), “that’s what these boys need, I feel.” United have not won back-to-back Premier League games all season. To make matters worse they have not won more than two consecutive games since January. How Solskjaer expects to go on such a run is a mystery. A run of four, five, six wins seems a million miles away for this floundering United team and life is going to get harder before it gets easier. “We just have to make sure we do everything right now until Wednesday because it’s a short turnaround,” Solskjaer stated after the game. Tottenham will be the visitors to Old Trafford mid-week when Jose Mourinho returns to his old club for this first time. The derby follows on from that as Guardiola’s men look to keep their title hopes alive. Two defeats for United look very possible. Two defeats would almost certainly rule them out of top four contention.

Solskjaer claimed that (via Bleacher Report): “The league table at this point is not the biggest concern because it’s so tight. I just need to make sure we get the right performances.” He is getting neither right currently. United sit in 9th position, behind the likes of Sheffield United and Wolves but arguably more worryingly, behind Arsenal and Tottenham who have made such poor starts to their campaigns the hierarchy felt the need to sack their managers. The performances may have picked up in terms of entertainment and goals but that does not equate to United putting in quality displays. The speed, fluidity and directness that secured Solskjaer the job has largely gone, and the defence is leaking goals at an alarming rate. United have already thrown away 12 points from winning positions this season, more than anyone bar Villa. The fragility of the side has become a staple element of United’s season.

Since Solskjaer’s permanent appointment in March, United have only won six Premier League games out of 22. They are currently closer to the relegation places than the Champions league spots and 22 points behind fiercest rivals Liverpool after just 14 games. The United legend will rightly point to some extenuating factors. The lack of replacements in the summer transfer window wasn’t his fault. The poor recruitment over the last seven years that has left the squad short on quality is not his fault, the injury crisis that has blighted United’s season is not down to Solskjaer and the reliance on youth is always going to cause some inconsistency. However, for a lot of fans he has got it wrong too many times now. His tactical prowess has been questioned on several occasions, with the latest episode at Bramall Lane. His decision to go to three at the back, exposing Phil Jones on his first Premier League start of the campaign was bad enough, but after United had managed to claw themselves ahead after the former Blackburn players removal, Solskjaer reverted back to the unfamiliar formation causing more confusion and contributing to Sheffield’s late equaliser. His substitutions have constantly come under criticism and Sunday’s were a prime example of why. With United chasing the three points Solskjaer replaced a left-back with a left-back when Brandon Williams made way for Luke Shaw, and only gave Mason Greenwood eight minutes from the bench, despite scoring his first Premier League goal last weekend.

The presence of Pochettino appears to overshadow Solskjaer further with every disappointing display. The former Spurs boss has recently stated his intention to manage in Europe again claiming (via BBC Sport), “There are a lot of clubs and attractive projects for me to take on.” With the Bayern Munich and Arsenal vacancies available United may need to move quick if they want to secure his services. It is well known that the problems at United do not lie solely at Ole’s door though. He has done a lot of good work during his time with the club, from extending De Gea’s contract and recruiting well, to integrating the youth with a fair amount of success.

The fans need to be realistic and taper their expectations this season and appreciate what Solskjaer is working with. On Sunday Aston Villa had a far better midfield than the one at his disposal. That was down to injuries and poor work in the transfer market last summer when United failed to replace Ander Herrera. There is nothing Solskjaer could have down about either of those things. The neglect of the owners and poor management at board level from Ed Woodward and co. are more to blame for the current state of affairs. Ole arguably deserves another transfer window or two to see out this transitional period, but this is Manchester United and results are required at all times.

It would be a sad site to see the back of Solskajer, a man who gives everything to the club and whose commitment cannot be faulted. The list of everything wrong at the club is lengthy and the majority were there long before his arrival and will most likely be there after he goes. Solskjaer’s dedication and determination has never been questioned, but the spotlight on his skillset is becoming ever brighter. The next two fixtures could make or break Ole. Pochettino is no guaranteed fix but failure to pick up at least one win could see possibility of Poch become more prominent than ever.