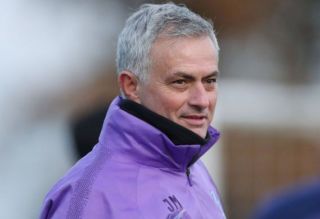 José Mourinho is confident he will receive a respectful reaction when he takes his Tottenham side to Old Trafford to face Man Utd on Wednesday in the Premier League.

The Portuguese manager was sacked by Manchester United a year ago after being made responsible for a poor start to the 2018-19 season.

He returned to management late last month after Mauricio Pochettino was dismissed by Daniel Levy, and now Mourinho heads back to his old home looking to make it four wins from four as Spurs manager.

This upturn in results from Spurs isn’t good for United — making our chances of finishing in the top four a lot more difficult with Leicester City looking likely to take up the other spot.

Despite the fact Mourinho was sacked by United, he is “happy” at the club for two-and-a-half seasons and hopes for a positive reaction from the fans who once sung his name:

“Tomorrow I go back as a coach of the team that is going to try and beat Manchester United and that maybe gives a different perspective,” the Spurs manager said (via Eurosport).

“I expect there is respect shown towards me, but I understand what they want is exactly the opposite of what I want — I want Tottenham to win, during the match of course I expect them to forget me, and I expect them to support their team and try and get the result they want.”

Spurs came to the conclusion of sacking Pochettino because they started the season poorly like United. They will be well aware that recent form may be signs of another honeymoon period under a new manager, but Mourinho will be hoping this job takes him back to the top as a football manager again.

Mourinho passed some comments on United’s targets this season — stating that he believes they could win the Europa League, repeating a feat he achieved as MUFC manager.

“These are things they [Manchester United] can do this season too,” Mourinho added, as per Bleacher Report. “They can win the Europa League, they’ve qualified for the knockout. They can win the Carabao Cup as they are still in the competition. They can win the FA Cup, they’ve got Wolves in the first round (third round). They can achieve these targets.”