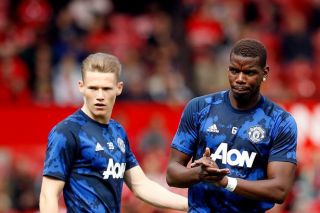 The manager has revealed that Paul Pogba is still unavailable for Man Utd but Scott McTominay is expected to return against Tottenham.

McTominay has missed the last three games against Sheffield United, FC Astana and Aston Villa with an ankle injury but Ole Gunnar Solskjaer says the Scotland international is expected to be fit for Wednesday night’s game.

Unfortunately for Solskjaer, Pogba has only played six times this season after being sidelined since September 30 with an ongoing ankle injury.

Nemanja Matic may not have much of a career left at United and has been out for almost two months. He is ‘touch and go’ to return against Spurs.

“He’s not ready, no,” Solskjaer told the press when asked about Pogba (via Manchester Evening News).

“He’s still a bit away but he’s working hard so let’s see. He’s out on the grass, let’s see how long it will take. McTominay and Matic? Touch and go but let’s get this training session out of the window, got more games than this one, can’t look at just the one game, have to look at long-term.”

United are still in a poor run of form and need their star players back to have any chance of turning things around. The Red Devils have picked up just 18 points from their opening 14 Premier League games this season (W4 D6 L4), which is the club’s worst start to a league campaign since 1988-89 when they went on to finish 11th.

And it’s safe to say expectations are low amongst supporters after the latest update on Pogba’s fitness.

In other words, Official: Manchester United have LOST tomorrow’s game against Tottenham.

Solskjaer is also expecting a warm reception at Old Trafford for former manager José Mourinho, who has seen an upturn in performances and results since taking over at White Heart Lane.

“Very good reception, that’s just a testament to this club and these supporters, remember two and a half years, won trophies, I’m 100 per cent sure our fans, staff and club will welcome him.”