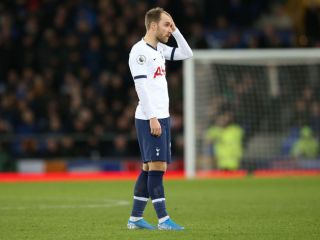 Tottenham midfielder Christian Erisken is attracted to Manchester United as one of the biggest clubs in the world, according to reports.

Athletic reporter Laurie Whitwell has published an article questioning the probability of Eriksen making the switch to Old Trafford, with his contract set to run out this summer.

The Danish international is still said to want to leave North London for a new challenge, despite the departure of Mauricio Pochettino and arrival of Jose Mourinho.

He has not started under José Mourinho since his arrival, but was brought on in the first-half to change the game in the Champions League tie against Olympiakos.

Whitwell’s report claims United made a late move for the creative midfielder in the summer, but a move could not be completed as Eriksen was holding out for a switch to Real Madrid.

Eriksen’s preference made United boss Ole Gunnar Solskjaer distance himself from the deal, with the Norwegian keen to sign players who are eager to put on the red shirt.

But the 27-year-old wants to play regular first-team football and if he is not preferred by Mourinho, this may make a January move possible.

Spurs chairman Daniel Levy would reportedly be happy to accept £25m for Eriksen in January as time runs out on him making any money on the player that was signed from Ajax six years ago.

This price tag certainly wouldn’t put United off for a player of such quality and Premier League experience, so it will be interesting to see if the Reds go back in for him this winter.

The Reds desperately need some added creativity in midfield and Eriksen’s attraction to Old Trafford makes the move comprehendible.